Another Player Enters the One Way Market 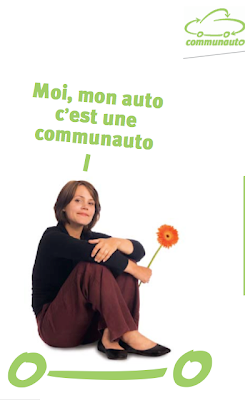 Under the leadership of founder and CEO Benoit Robert, CommunAuto is one of the best run independent carshare operators in North America.  Now, they've announced their intention to provide one-way "mobility on demand" service in Montreal.

The one-way on-demand service will be separate from CommunAuto's traditional "round-trip" service and operate under a separate brand.  The intention is to offer floating parking in a large zone of central Montreal.  The press release says in a few weeks they will offer a "road map" for implementing "mobility on demand" service.  Presumably, they've been meeting with partners leading up to this press announcement.  "This service should, ideally, be able to finance itself," Robert said in a press release. "We would rather the state invests taxpayers money in the development of public transport than diverting its resources into the subsidization of the automobile," according to Robert.

A report on Cyberpresse.ca, indicated the new service might consist of 400 vehicles at a rate similar car2go (about 35¢ per minute, $13 per hour or $66 plus tax per day).  The report indicated that they were hoping to be able to use the Montreal transit system's Opus fare card for member identification.  Robert would not confirm the name of the new service in his interview with reporter Karim Benessaieh, but perhaps humorously suggested that it might be "Auto-xi", a reference to the name of the on-demand public bicycle service in Montreal - Bixi (and similar to the names of the bicycle and car services in Paris - Velib and Autolib).

Understandably, other carshares, especially the independents, are concerned about competition from a well-funded service, such as car2go.  CommunAuto seems to be staking out the one-way territory in their service area, perhaps to keep Daimler's car2go out of their back yard.  "A one-way carsharing service alone is not an attractive alternative to car ownership," says Robert.  "It cannot, therefore, ensure that people will use public transport or any other competing modes of transportation, such as taxis, bikes and walking rather than privately owned cars."  In the Cyberpresse interview Robert reminds us that "private automobiles" are the main competitor to carsharing.

CommunAuto says that they will monitor the implementation process and "ensure that the introduction of this service will be done with a view to promote sustainable mobility and in collaboration with our partners, the cities, the public transportation companies and all the other stakeholders in the transportation industry", according to the press release.  They've already begun a "pre-selection" of possible vehicles for the one-way service, including electric vehicles.

I agree that it is important for cities to pay attention to the different "flavors" of carsharing.  The widely-accepted social and environmental benefits of reduced car ownership and reductions in annual vehicle miles (and kilometers) traveled in single-occupancy vehicles is likely to be different for one-way services.  This is no different than differences in impact for traditional "round-trip" carsharing operating in different cities and even different parts of the same city.  That said, until there are 3rd party peer-reviewed evaluations of the impact of "mobility on demand" services, I think cities should be cautiously-supportive of one-way and include a requirement to participate in these evaluations as a condition of their support.  (CommunAuto is the subject of one of the best carshare evaluations I've seen - here).

Don't misunderstand me: from my previous work in the one-way area I certainly expect there to be benefits in reductions in auto ownership and shifting of trips to (and from) other modes. (Recall that Robert Cervero's analysis of City Carshare members also found a small shift of transit trips to carshare in San Francisco, although the net change was a beneficial.)  But how much change is the question?  I also expect that one-way services will attract a somewhat different member demographic than traditional "round-trip" carsharing does, which may open the door of "access-not-ownership" to a new group.  Let's see what the evaluations show? 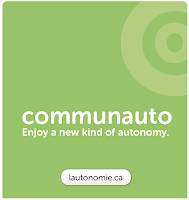 CommunAuto currently has 23,000 members using 1,200 vehicles at 360 stations in Montréal, Québec City, Gatineau and Sherbrooke.  They have a long tradition of taking an original approach to providing carsharing. They were the first carshare in North America (as AutoComm), starting in 1994 and later converted from a non-profit to a for-profit business model; they offer unusual pricing and membership plans to address the needs of their members (including their latest L'autonomie); they own their fleet rather than leasing, with virtually all a single model (currently Toyota Yaris), holding on to vehicles for much longer rather than the standard 3 year period of other carshares; they developed unique process for providing members access to discounted rental car; first integrated service with other carshares - VrtuCar (Ottawa) and CarShare Halifax (Nova Scotia); partnerships with Via Rail, public transport and Bixi bike sharing. Most recently, they've announced large-scale integration of Nissan Leaf EVs into their fleet and announced intention to offer a limited peer-to-peer rental scheme in conjunction with a Provincial auto insurance company.  they provide a nice history of their service (in French) here.

CommunAuto demonstrates its leadership again and has raised the stakes in carsharing.  It will be interesting to see how their service develops and whether other independent carshares in bigger cities - in North America and Europe - will take similar moves.
Posted by Dave at 1:20 PM