Many people have asked me why a car manufacturer would offer an alternative to car ownership?  My response has always been, look who's doing it: Daimler, a high end company, has little to lose offering Smart cars in their unique one-way rental service  — it helps the production of Smart cars and doesn't cannibalize sales of their other Mercedes models.  (Arguably, BMW is in a somewhat similar position.)

And, I would argue, that other European manufacturers, such as VW, which have entered the carsharing space are realizing they're approaching the limit to how many new cars can be sold to European customers so they'd better start thinking about other car-related ventures.

The German newspaper Die Zeit recently published an interview with Robert Henrich, worldwide head of Daimler's Car2go program that provides some helpful insight about Daimler's thinking.  Below are some loosely translated highlights of that interview: 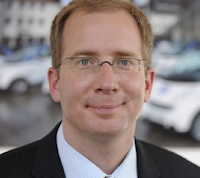 Die Zeit: What does Daimler hope for car2go?

Henrich: A new and profitable business model. Carsharing is not just a hype, but a social trend . People want to be mobile, perhaps even more than before, but do not necessarily own the vehicle. We are at the forefront of this trend and want to become market leaders.

Henrich says that Car2go is expected to be profitable by 2014.  In the interview he confirms my thesis, that car2go does not compete with their core business.  The value of car2go, he says, is that with car2go, "we talk to new customer groups, especially young urbanites" and since "(car) buyers are also (car2go) users" Daimler hopes this will help them extend their brand into the younger generation, some of whom will eventually buy Mercedes autos.
Die Zeit: What will mobility look like in ten years?
Henrich: I am convinced that car-sharing, especially in the cities will play a much wider area than today. Everything will revolve around the question of how the various modes of transport can be networked - this is the future.
I must admit I don't completely buy the whole networked future of automobiles idea, mostly because I'm still skeptical that enough pieces of the "pay by the mile" puzzle will ever be in place - at least in the US.  At least not until some sort of comprehensive information privacy pact can be developed.  But since all the "car guys" are talking about it, something is likely to happen.
And what about US auto manufacturers following their European counterparts into providing other mobility services?  My guess is that's a few years away.  Considering that they all recently went through major restructuring allowing them to be profitable at lower sales volumes than before, I expect they will stay closer to their core business for a while.  To date, the Ford deal with Zipcar can be viewed primarily as getting exposure to a younger demographic for Ford vehicles.  The GM/OnStar deal with RelayRides is more interesting and could turn into something big, but we won't know until we see RelayRides version 2.0.  Shelby Clark puts a positive spin on the GM/OnStar deal in  The Auto Industry Embraces Its Own Disruption  on a Harvard Business School blog site.
Posted by Dave at 1:18 PM