Zipcar's second annual transportation survey again highlights that the 18 to 34 year old demographic has different ideas about transportation than their elders.   If one needed persuading, it's more good news that the future personal transportation isn't going to be an extension of the 1950s through 1990s. 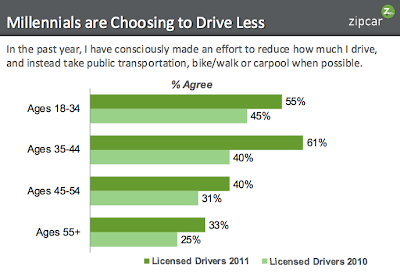 It seems likely to me that the perspective of the Millenial (AKA Gen Y) on travel would be even more extreme if more had access to better transportation alternatives, such as better bike lanes, better bus and rail service, and more sidewalks.

Although Zipcar describes the results of the survey in terms of their target demographic, it's worth noting that a significant number of people in ALL age categories are interested in reducing their driving. 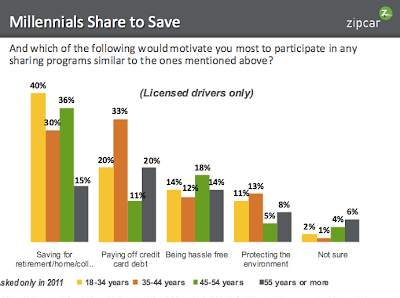 What would people do with the money they save from driving owning less?  Not surprisingly, people say they would save the money or pay off debt.  Convenience and the environment came in 3rd and 4th place as motivations.


"Policy makers should also take notice and accept that our youngest generation will not think about transportation the way we have for the last hundred years, nor will future generations," [said Zipcar CEO Scott] Griffith.  "Our most forward-looking policy makers are thinking about housing, land use, highways, bridges and gas taxes like it's 2015 rather than 1971.  It is my hope that these thought leaders will inspire a broader dialogue on mobility policy instead of sticking with an outdated transportation policy that directs limited funds almost exclusively toward highways."

But don't worry the car isn't going away any time soon, even though it certainly won't be your father's Oldsmobile (which went away in 2004).  2011 witnessed the launch of freeway capable battery electric cars (Nissan Leaf and Mitsubishi iMiev) and the idiosyncratic Smart car has been joined on this side of the Atlantic by competitor microcars, the Fiat 500 (strong sales) and just before the end of the year, the Scion (Toyota) IQ (gas powered), somewhat legitimizing the market segment.

You can see Zipcar's 12 slide deck on the survey here and read the press release here.
Posted by Dave at 2:02 PM