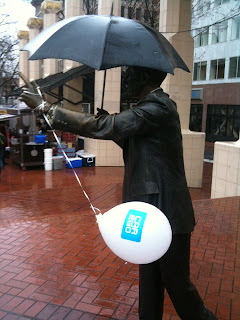 I took my first trip in a Portland car2go vehicle this wet morning — a 10 minute trip from NW Portland over to my house in NE Portland.  Given the weather it was probably the least auspicious launch of any car2go city.  But by noon at least the rain had stopped and people were venturing out of the houses and condos and coming downtown.

Yes I could have done the trip by transit — 44 minutes by bus with one transfer (and we have frequent service) — or 22 minutes by bicycle, but I was soaked and, besides I had this brand new car2go membership cards that was itching to be used.

Portland must now hold some sort of record for the most number of carsharing vehicles per capita — a little over 700 vehicles from the 3 companies — Zipcar, Getaround and now car2go — for 500,000 people in the city.  With 3 services, each with slightly different niches, the choices to go car-lite or even car free have never been greater. 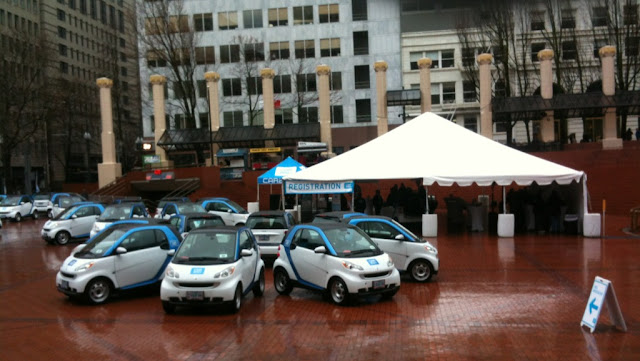 What are the niches for Zipcar, Getaround and car2go? This is my take:

I've put together a table comparing the services here.

One local, long-time industry observer (not me) predicts that zero car households in the close-in neighborhoods could be greater than 50% in the next few years — that's a long way from the current 16% we are now.  Of course that won't be solely because of carsharing — Portland has done many things right over the past 20 years — density, walkable neighborhoods, good transit.  And, it looks like we'll even get public bikesharing sometime soon!

And if you're interested in what infrastructure is conducive for households to actually start lowering their vehicle ownership, transportation planner Jarrett Walker has written a very interesting piece about it.  He thinks Portland has many of the right factors in place, even though we are not even in the top 50 cities for low car ownership.

So, I welcome car2go to Portland.  You're in good company here.  And thanks for the free coffee and Honkin' Huge Burrito (from one of Portland original food carts) this morning, too.
Posted by Dave at 2:16 PM