Why Do We Tax Carsharing Like Liquor and Cigarettes?

This is the provocative title of any excellent article appearing on the Atlantic Cities website. It refers to excellent research of the effective tax rate of carsharing services in 82 US cities showing rates as high as 62% (average 17.9%)!

The research was conducted by Alice Bieszczat and Joe Schwieterman, of the Chaddick Institute for Metropolitan Studies at DePaul University, in Chicago which showed that cities, even supposedly enlightened ones, are taxing carsharing at rates for more than even car rental - a traditional cash cow for many cities.

I saw Mr. Schwieterman present this paper at TRB in January and was astounded, meaning to post something about it. As the authors are quoted in the Atlantic article, “In places like New York, where it’s 19 percent or more, it’s sin-tax levels,” says Alice Bieszczat. “We’re taxing car-sharing like it’s liquor or cigarettes, like it’s a carcinogen. And it’s quite the opposite. It’s a service or product that reduces carcinogens in the air.”

The study, "Are Taxes on Carsharing Too High: A Review of the Public Benefits and Tax Burden of an Expanding Transportation Sector". The full report is available for download here (PDF). Part of the problem is that cities and states have tried to shoe-horn car rental taxes on to carsharing. And, to be fair, while effective tax rates of 62% are egregious, they're calcuated on a one hour trip - a minority of trips (and one sure to make a dramatic statement about how high the taxes are). 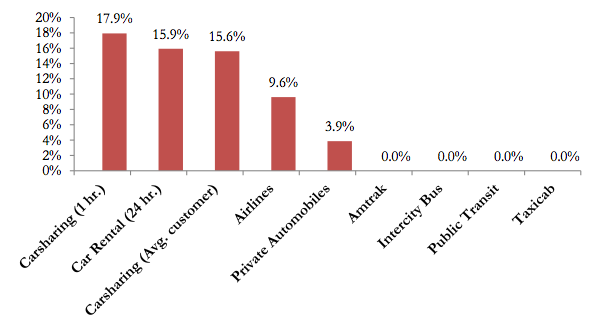 But I don't think we should even be talking about taxing something we want more of, at least until carsharing becomes the new "normal" - which may still be a few years off. This is an excellent reminder of how desperate our cities are for revenues, and how poorly informed about the benefits of carsharing most are. That's our job, for those of us in the industry, and it would appear that most of us have been spending too much time on other things. But it's not too late and shouldn't be impossible if a few champions are cultivated within city councils.

And let me again remind readers that there's been very little study about whether the well-documented benefits of classic "round trip" carsharing (e.g. Zipcar, City Carshare), such as reduced car ownership, reduced VMT, etc.) also apply to newer services, such as Peer To Peer Carsharing or one-way/on demand services (e.g. car2go).

The car rental companies think they're being unfairly taxed for years.  Although the American Car Rental Association was cited in the article as supporting lower carsharing taxes, my quick check of their web site didn't turn up anything specifically about carsharing. Don't get me wrong friends in the car rental industry, I agree that car rental taxes have far outlived their fairness of "user pays" for funding convention and visitors centers.

And pardon me, but why are magazine and newspaper editors SO entranced with those cute little smart cars, that they've just about stopped using pictures of a boring old Zipcar Mini Cooper to illustrate "caersharing"?  That was so yesterday!
Posted by Dave at 1:35 PM