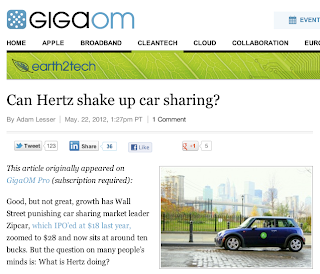 There's a story making the rounds of the blogosphere that Hertz On Demand somehow has a major competitive advantage over Zipcar because it doesn't charge any membership fee.  GigaOm said it most recently, Motley Food has repeated it and I've seen the argument in other places as well.

The argument for Hertz successfully competing with Zipcar goes like this: Hertz doesn’t require an annual membership fee (Zipcar charges $60), has no late fees (Zipcar charges $50 per hour), it allows one way rentals in some locations, and yeah, it already has a massive fleet of diverse cars.

Where does the idea come from?  Possibly, from a line item on Zipcar's SEC 10-K filing that show that "Fee Revenue" amounting 15% of total revenues.  Wow, that's huge!

Or is it?  One doesn't have to dig very far in the filing to see that Zipcar reports that a significant part of this is because of "strong uptake in our damage waiver offering".   More power to Zipcar for developing a value added product that so many members want.

A little background on fees

First, it's important to distinguish between Application (joining) fees and Membership fees.  In the US, most companies charge an Application fee that usually includes (by implication) the first year membership fee.  (Zipcar says it apportions the value of the Application fee over the estimated average 5 year life span of membership.)  And a quick perusal of web sites and Twitter indicates that Zipcar always has promotions going on that reduce this amount significantly and include a bunch of free driving to help the new member get acquainted.

So, for most carsharing services it isn't until the second year that a member faces the payment of a membership fee.  By then, the company hopes that either the member sees enough value in the service that they're willing to pay the $50-$75 fee, or probably they had barely, if ever, even used a vehicle so they might not be a very valuable customer anyway.   And it's important that not all members pay the fee - only the Occasional Driving plan (Hourly) members, which is the largest pool of members.

Another fee likely included in this overall Fee Revenue number are Late Return fees to motivate members to get the back on time, or reserve an extra hour.  No company wants to make money by this method since it inevitably involves frustrated members.   Zipcar is in the middle of a lawsuit with one member about their $50 per hour fee.  But just about every carsharing company charges them, and often the issue is how strict or lenient the company is.

It's not surprising that an up and coming competitor like Hertz needs to find some way to differentiate themselves and there's nothing like lowering the cost of membership to make a distinction.  But, eventually, they'll want to find a way to gain that revenue somewhere - either in usage rates or other charges.  And if Hertz doesn't charge a Late Return fee they must have a lot of extra cars sitting around ready for the next user of the car that's late.

What does it all mean?

One of the reasons that Zipcar can charge a Membership Fee is that they provide enough value that members are willing to pay it.  After all, in cities where they are competing with another service, Zipcar may have 100s more locations and vehicles that their competitors so they offer much greater choice for customers.

FLASH: In fact, not only is Zipcar willing to charge a membership fee, they've just announced a test marketing in Chicago of a new $6 per month membership fee which (it appears) is charged from the month of membership approval.

There's no doubt in my mind that when Hertz On Demand or Enterprise (now that they've signaled that they're going to get into carsharing in a much bigger way by acquiring Mint Carsharing) will eventually charge a membership fee when they can.

And it's worth noting that independent carsharing companies in North America, such as Autoshare, I-Go or City Carshare, almost always charge a membership fee, some even charge a monthly membership fee - the ultimate reminder to members.  But those "indy" carshares also have lower hourly rates than the "big guys"

In my humble opinion, the biggest challenge to Zipcar (at least in New York City) would be if Hertz follows-through on their threat to install their access technology in all 35,000 of their vehicles.  (Actually, they would only have to wire a small percentage of 35,000 vehicles to be a threat.)  And if they did wire all 35,000 vehicles they'd be well on their way to executing a whole new hybrid car rental — car sharing business model that poses a threat to lots more than Zipcar.
Posted by Dave at 9:49 AM