Using data through January 2013, Doug Short of Advisor Perspectives, has posted another informative analysis at Business Insider showing we're continuing our downward trend in VMT (vehicle miles traveled) in the US.

When adjusted for population, we're back to 1995 levels of driving. And, as has been pointed out many places, the decline actually began in 2004-5, 3 years before the big recession.

Although the VMT is up a fraction (0.24%) over last year, Mr. Short attributes much of the continuing post recession decline to "demographics of an aging population in which older people drive less, continuing high unemployment, and the ever-growing ability to work remote in the era of the Internet." 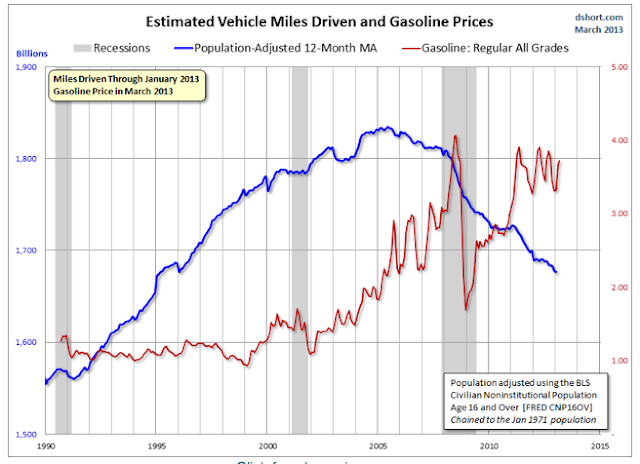 This chart above shows that gas prices have a very weak influence on driving behavior.   For policy wonks Mr. Short includes an interesting discussion of various considerations in analyzing the data.

All this points to increased interest in carsharing, bicycling and bikesharing systems, walking and transportation alternatives in general, especially in urban areas.

Mr. Short links to a US PIRG report (PDF) prepared by the Frontier Group detailing the reasons for a relatively shart decline in 16 to 34 year old group - 23% decline in VMT since 2004 - including the much talked about substitution of social networking platforms (i.e. smartphones) for driving. It includes information from the Zipcar millennial survey and discusses implications for future transportation policy in the US.   A slide deck from the report can be found here.
Posted by Dave at 2:42 PM