The Ides of March

March has been a busy month in the world of carsharing executives, although perhaps not quite as bad as it was for Julius Ceasar:

Zipcar Shake Up — CEO Scott Griffith unexpectedly announced his resignation, immediately after the Avis deal was completed.  He handed the reins over to the COO Mark Norman.  Scott joined Zipcar in 2003, replacing co-founder Robin Chase.


"We’ve built an incredible company; we’ve taken a big idea and turned it into a larger than life brand at the leading edge of an expanding global category; we’ve developed a technology platform that has become the industry standard; we’ve inspired the development of collaborative consumption; and we’ve sparked a major behavior shift in the areas of urban and campus mobility."

My sense is that Scott had the complicated, and perhaps thankless job, of trying to reconcile conflicting needs major investors, apparently interested in getting their investment, getting the company to a marginally profitable place, and trying to grow the business at the same time. 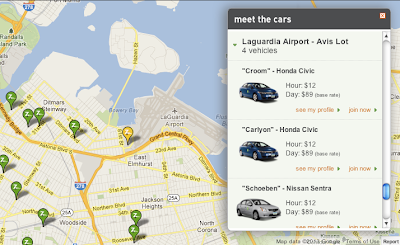 Although the blogosphere was breathless with early commentators talking about Avis could ruin Zipcar, there's certainly been no evidence to date.  Perhaps the first fruit of the merger has been the announcement of Zipcar at airport locations (!) at all three major airports in in New York City - located in the Avis parking areas, not surprisingly.  The initial batch of vehicles appear to be pretty standard sedans, with no BMWs or lifestyle vehicles (yet).  And they are round-trip cars (must be returned to the airport) and not one-way vehicles, as Hertz On Demand offers between the airports and Manhattan locations.

So best of luck to Mark Norman as he gets to put his own imprint on the next chapter of world carsharing.  And I hope Scott is vacationing in some exotic location while considering his next move.

RelayRides Departure — Many in the P2P carsharing world may have missed the low-key announcement that founder Shelby Clark made the decision to move on to his next adventure.   He had already been moved into a special role of Chief Community Officer two years ago so the Founders aura had already worn off.

I had the pleasure to work with Shelby during the early days of RelayRides, working with the initial team to help set up the pilot project in Cambridge and later doing some interesting market research prior to the San Francisco launch.  RelayRides has evolved considerably since these early days and along the way struggled mightily to figure out their technology approach.  A recent announcement celebrating the first anniversary of "going national" (rather than a city by city approach) shows just how far RelayRides has come — cars in all 50 states, 45 times growth in active fleet and reservations hours up 7 times.

Mysterious Demise of Whipcar — Talk about cryptic, Whipcar announced on Monday, March 12 it was shutting down.  The only explanation they've offered, so far is this:


"However, while so many of you saw the future, we have discovered there are still barriers to widespread adoption of peer-to-peer car rental in the UK. As a small team with limited resources, we have taken a good long look at these scaling challenges. And, after much thought, we have made the extremely difficult decision to close WhipCar. We would like to thank our wonderful community members, our colleagues and our investors for their incredible support over the past three exciting years."

One wonders exactly what the "barriers to widespread adoption" they have in mind?


Some Thoughts — One certainly gets the sense that P2P carsharing may be struggling a bit these days, at least in the North America and the UK.  But I wonder if any new business could meet the heady expectations we all had for P2P in the early days — expanding into the suburbs, putting traditional carsharing companies out of business within a few years, etc.

Some P2P companies have struggled to find an affordable in-car technology solution that could scale with their hoped for growth, while others have opted out of car technology game altogether and chosen to occupy the P2P car rental niche, instead.

And marketing P2P carsharing is only slightly different than marketing traditional carsharing.  The P2P companies have proved that people will list their cars for rent by others and that only $100-$200 per month income is sufficient reward.   The challenge for all carsharing continues to be getting drivers/renters past the perceived convenience of car ownership continues to be a huge hurdle in a country with  cheap gasoline, low taxes on cars and abundant parking in most places.