Is Milan the World Capital of One Way Carsharing? It Depends...

The phenomenal growth of one-way/round trip carsharing around the world has redefined the carsharing world and I wanted to share some of my thoughts about what's happening the in carshare world right now.

Recently there was talk that Vancouver BC was the carsharing capital of the Pacific Northwest (including Oregon, Washington and British Columbia) with 2,550 carshare vehicles - with 2 round trip and 2 one-way operators. That's certainly impressive and speaks highly of the density and transportation options available to residents to make it easy to go car-lite or all the way to car-free.  There are no P2P carshares in Vancouver (I consider Turo car rental since they don't have technology in the cars but rely on key-swap.)

In Europe, Berlin was the early pioneer in carsharing — home to the pioneer carshare, StattAuto, back in 1987 and now home to 3 free floating services (formerly 4 until the demise of Spotcar) and 5 round trip companies (formerly 6 before the demise of CiteeCar) with about 181 vehicle locations combined (I have not been able to locate recent vehicle counts).  In addition, there are 3 P2P carshares (functionally round trip carshares) with an undetermined number of vehicles and also a Scooter-sharing service with 150 electric two-wheelers.  (It seems strange to me that after all these years none of the roundtrip carshares in Berlin seems to dominate the city — the largest, Flinkster, has 63 locations and the next largest is Greenwheels with 48 stations.) 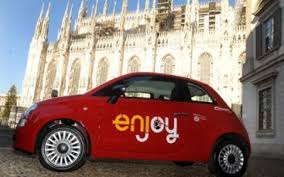 Now on to Milan - Maybe it's just a coincidence, but in one 24 hour period I saw 3 articles about carsharing in Milan and I was blown away.  Milan is crazy about one-way/free floating with 5 operators:

There was another one-way service, Twist, using (electric) VW E-Up!s that shut down last year. (could it be because they put their name in big letters backwards on the hood of each car - so it would appear normal in the rear view mirrors of other drivers - just kidding).  It appears the Milanese not so interested in round trip/station-based with only 1 company - GuidaMi, with about 130 cars, operated by GirACI, a roadside assistance provider in Italy.

Carlo Iacovini, mobility consultant in Milan offers the following reasons for the Milan's adoption of one-way/free floating, "[T]he reason is mainly that free floating is easy and linked to free-style... The
the boom came with free floating, as it’s easy to use and became in one year a lifestyle service. ..
Also consider that Smart and Fiat500 are very popular cars and people loved to ride them in the city… [It] doesn’t matter how good public transport is… it’s more a [question] of flexibility and trend."

Part of the appeal is that all carsharing vehicles are allowed to operate without fee within Milan's central city ecozone, Area C. And, a minor attraction may be that several carshares allow one-way pick up and drop off at Milan's Malpensa airport (a 50 minute trip under good conditions).

The City of Milan seems to think there are benefits to one-way/free floating carsharing because they recently announced a tender to attract even more one-way carshare operators - with special encouragement to EVs (too late for Twist)!

All together there are approximately 2,300 carshare vehicles and 300,000 members in Milan.  It's worth noting that while vehicle counts are certainly a useful metric for cities to pay attention to, another useful way to look at the impact of carsharing is the number of vehicles per 1,000 city inhabitants.  To put that in perspective:

(I present this city-carshare comparison somewhat reluctantly. While these numbers are interesting, they're also misleading and a little unfair, since the home areas of the one way carshares in Berlin, which make up the bulk of the carsharing fleet numbers, do not include some major parts of Berlin's population, unlike the service area of carshares in much smaller Vancouver.)

One way to look at cities is comparing the overall mobility.  One recent comparison one is the Shared Mobility Index, which looks at urban density, commuting patterns, whether the city has a sustainability plan, presence of various shared mobility services (carsharing, bikesharing) and average daily parking cost.

All 3 cities are pretty pretty good, with no clear differences. What do you think (comment below).  Thanks.

* For what it's worth: As many carshare vehicles as Berlin has, according to the Bundesverband CarSharing Deutschland (PDF), Berlin is actually number 11 in the list of German cities: much lower ratio than Karlsruhe at 2.15 carshare vehicles thousand inhabitants.